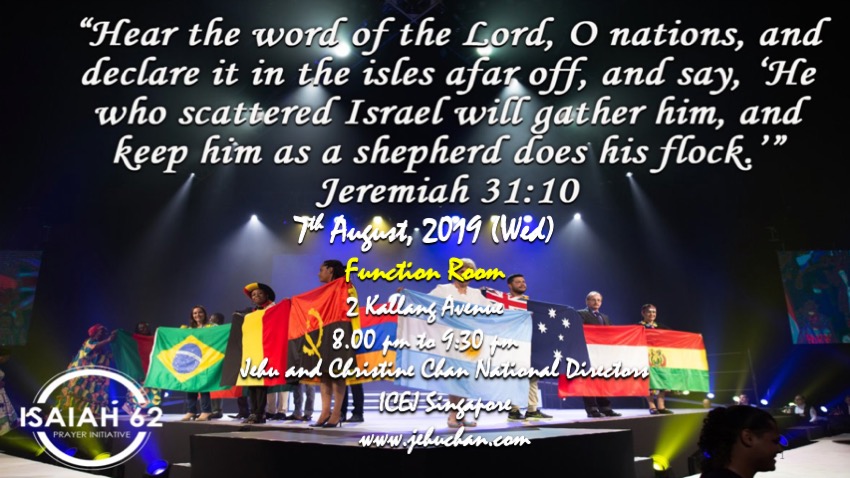 We all know God speaks to us but in different ways. Sometimes He speaks audibly, other times we sense His answer in our spirit, and many times He speaks through His Word. Jesus often said: “He who has ears to hear, let him hear!” (Matthew 11:15; 13:9) May we indeed have ears to hear God’s guidance for our lives.

But God also speaks to those who don’t know Him. How can He possibly speak to those who don’t care or even believe He exists? And why? We find only a few Scriptures where God is speaking to the nations, rather than to His people, and we see He does so by doing something with Israel.

“Therefore hear, you nations, and know, o congregation, what is among them. Hear, O earth! Behold, I will certainly bring calamity on this people— the fruit of their thoughts, because they have not heeded my words, nor My law, but rejected it.”(Jeremiah 6:18-19)

“Hear, all you peoples! Listen, O earth, and all that is in it! Let the Lord God be a witness against you, the Lord from His holy temple. For behold, the Lord is coming out of His place; He will come down and tread on the high places of the earth. The mountains will melt under Him, and the valleys will split like wax before the fire,

like waters poured down a steep place. All this is for the transgression of Jacob and for the sins of the house of Israel.”  (Micah 1:2-5a)

What do these verses have in common? The Lord declares His judgment over Israel and wants the nations to listen. What does He expect them to learn? He wants to know that He is holy and righteous, and when people sin it invites punishment. By looking at the fate of Israel, it should instill the fear of God in them.

History shows the nations indeed took notice of Israel’s reproof. However, instead of fearing God, they used it as an opportunity to vent their own hatred against the Jews. They added to the judgment God intended, which did not please Him. God is zealous for Zion even when chastening His people. “I am zealous for Jerusalem and for Zion with great zeal. I am exceedingly angry with the nations at ease; for I was a little angry, and they helped—but with evil intent.”  (Zechariah 1:14-15)

God uses Israel to reveal the intent of our hearts. Sadly, even the Church misread God’s correction of the Jews and forgot Paul’s words: “Concerning the gospel, they are enemies for your sake but concerning the election, they are beloved for the sake of the fathers. For the gifts and the calling of God are irrevocable.” (Romans 11:28-29) The Church erroneously taught that God punished and rejected them forever. It adopted the thinking of the world, rather than representing the character of God to the world.

This brought forth much evil fruit. The Church gave license to persecute and kill Jews, and Christians followed their evil inclination believing they were serving God. Hitler was correct when claiming he was only implementing what the Church had always taught. If only these Christians would have read their Bibles. God has other thoughts about Israel, and He wants all nations to take note:

“Hear the word of the Lord, O nations, and declare it in the isles afar off, and say, ‘He who scattered Israel will gather him, and keep him as a shepherd does his flock.’”(Jeremiah 31:10)

The restoration of Israel is a work of God which reveals His mercy, lovingkindness and faithfulness. In Ezekiel 36:22-24, God tells Israel that He is gathering them back to their own land, not for their sake but to sanctify His holy name. He also says, “the nations shall know that I am the Lord.”

Again, God is using Israel to teach the nations, and He expects them to acknowledge the restoration of Israel as His handiwork. He adds a warning:

“Come near, you nations, to hear; and heed, you people! Let the earth hear, and all that is in it, the world and all things that come forth from it. For the indignation of the Lord is against all nations and His fury against all their armies… 8 For it is the day of the Lord’s vengeance, the year of recompense for the cause of Zion.”  (Isaiah 34:1-2,8) The Lord is going to judge the nations “on account of My people, My heritage Israel, whom they have scattered among the nations; they have also divided up My land”(Joel 3:2).

Let us pray this month for our nations, repenting for their wrong attitudes towards the people and Land of Israel. Let us ask the Lord to show mercy and turn the hearts of our leaders towards Him, so they may accept and even welcome the restoration of Israel as the work of God’s hands!